Posted by DragonJon on November 30, 2014
Posted in: Do You Remember. Leave a comment

(above Chris taking on the Hornchurch defence.)

A terrific servant of the club Chris was a skilful midfielder whose positive play always caused problems for the opposition. His early career saw him play for both Prettygate and Elmstead and he made his debut for Wivenhoe Rangers at the age of fifteen when he came on as a substitute for the Reserves on 31st August 1973 in a 9-0 win over Paxmans Reserves. His first ever goal for the club came once again as a playing substitute for the second string on 15th September 1973 in an 8-0 victory at Felixstowe Reserves. Chris became one of the club’s youngest ever First Team players as he made his debut on 20/10/73 as Wivenhoe thrashed Harwich Rangers 13-2 at home in an Essex & Suffolk Border League Cup tie.

Apart from brief spells at Tiptree United (three months) and Brightlingsea United (two months) Chris spent over sixteen years with the Dragons during which time he showed his class by being an outstanding performer at Border League, Essex Senior League and Isthmian League level making him one of the first names on the team sheet under the club’s various managers. Whilst at Broad Lane he gained Representative Honours for Essex and earned his Senior County Cap in 1985/86. Having achieved three Promotions (winning two Championships) and an Essex Senior Trophy Winners medal with the Dragons Chris made his last First Team appearance on 20th December 1988 in a Floodlight League game at Clacton Town and eventually departed from the club in May 1989 to join Braintree Town. In total he made 455 First Team appearances and scored 77 goals, in addition to 80 Reserve Team appearances during which he netted a further 21 times.

After leaving Braintree Chris had another spell with Brightlingsea United before joining Gas Recreation where his performances saw him picked to play for the Essex & Suffolk Border League Representative side. He made a surprise one off return to Broad Lane on Saturday 13th September 1997 as he turned out for our newly formed Reserves in an Essex & Suffolk Border League Third Division fixture against Walton Town. Although at the latter stages of his career the control and passing ability was still there to see and he set up the first goal in a 2-0 victory. Quite rightly Chris Dines ranks amongst the best players to have worn the Wivenhoe shirt.

(below Chris Dines on the ball during the Dragons’ first ever F.A.Cup tie at Erith & Belvedere on 29/8/87.)

(above Chris skips over a challenge during the 3-1 Essex Senior Trophy Semi Final win over Barkingside on 6/2/88.)

A TO Z OF THE ESSEX SENIOR LEAGUE DRAGONS PART 1

Posted by DragonJon on November 18, 2014
Posted in: Into the Archives. Leave a comment 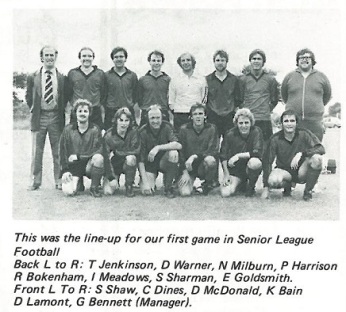 Former Harwich & Parkeston player who made his Dragons debut in midfield on 3/10/81 having joined the club from Brantham Athletic. Made his last appearance on the 5/6/82 before returning to Brantham in the summer of 1982. Later rejoined Harwich before going on to have a third spell with the Blue Imps.

Defender signed in October 1980 from Witham Town having previously played for Tiptree United and Billericay Town, where he was part of their 1976 F.A.Vase winning squad against Stamford. Made his debut for us on 18/10/80 and was a first team regular for around two seasons before leaving to go and link up with Maldon Town in July 1982. Returned to Broad Lane in August 1983 but left once again (making his final appearance on 17/9/83) because of problems involved in travelling. Went on to become Reserve Team Manager at Billericay Town

Forward who was a member of our Reserves before making his Senior debut on 18/4/85. After a couple of seasons away he returned again to play for the Reserves during 1988/89 but once again departed. Played for Gas Recreation before rejoining us in February 1992 from Brightlingsea United. Left that summer to join Needham Market having made his final appearance on 12/5/92 and also played for Halstead Town and Tiptree United.

Record appearance maker who first joined Wivenhoe back in October 1976 from Lawford Lads during our Essex & Suffolk Border League days. Made his first team debut on 30/10/76 and remained until 1983 when he joined Tiptree United. After a long spell out of the game through injury Keith returned to Broad Lane in November 1986 but left again to join Sudbury Town in July 1991. Played for us again during 1992/93, before linking up with Heybridge Swifts. 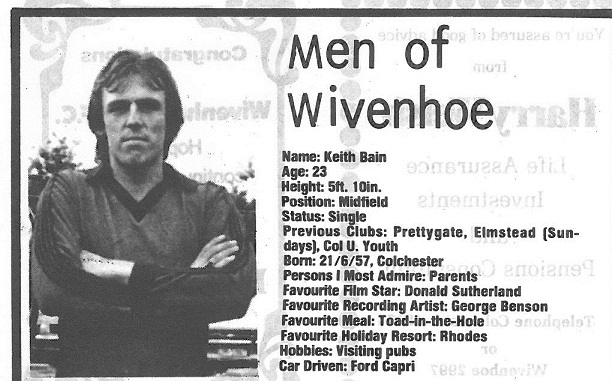 Signed from Coggeshall Town back in July 1983 Peter made his debut on 20/8/83 and remained with the Dragons until May 1987, spending the 1986/87 campaign as our Reserves Manager. Went on to have spells with Little Oakley, Coggeshall, Witham Town, Alresford Colne Rangers and Stanway Rovers but made a couple of appearances for us at the beginning of the 1991/92 campaign (his last on 24/8/91) before returning once again to manage our Reserves during 1992/93 prior to becoming First Team boss of Stanway. Also played for Colchester United, Hartlepool, Workington,Nantwich, Stafford Rangers (with whom he gained an F.A.Trophy Winners medal), Hednesford Town, Heybridge Swifts and Chelmsford City during the course of his career.

Forward signed from local neighbours Elmstead in July 1977. Made his First Team debut in a 4-0 Essex & Suffolk Border League victory over Sudbury Town Reserves on 20/8/77. Although his Senior appearances for the Dragons were limited he scored plenty of goals in our Reserves before returning to local football. Dave’s last First Team appearance came on 25/9/79.

Joined Wivenhoe in July 1977 having previously been on the books of Colchester United as well as playing for Brightlingsea United, Tiptree United, Harwich & Parkeston and Coggeshall Town. Making his debut as Player/Manager on 20/8/77, he remained at the helm until departing in January 1983 after making his last appearance on 27/12/82. Returning to the club as Manager in January 1987, Geoff led the Dragons to the Isthmian League Division Two (North) and First Division Titles as well as winning the Essex Senior Trophy in 1987/88. After taking us into the Isthmian League Premier Division, he became Chairman of the club in June 1990 prior to leaving Broad Lane twelve months later.

Midfielder signed in August 1985 having formerly been on the books of West Ham United as a Youth. Scored on his Dragons debut in a 3-0 victory at Eton Manor on 17/8/85, Matt’s Wivenhoe career was limited by injuries before he eventually left to link up with Braintree Town after playing his last game in a Dragons shirt on 6/9/86. Later went on to play for Alresford Colne Rangers.

Defender who joined the club at the same time as his brother Geoff, but did not make his First Team debut until 30/3/79. Left to join Tiptree United but returned in November 1985. A spell with Harwich & Parkeston followed before he rejoined us in February 1987. Became Reserve Team Manager in January 1991 before departing four months later, having played his last First Team game on 13/3/90.

Left winger signed from Coggeshall Town  just after the beginning of the 1980/81 campaign. Made his debut on 15/11/80 but found his opportunities limited in the First Team through the good form of others. Eventually decided to return to Coggeshall after making his last appearance for the Dragons on 11/4/81.

Highly regarded goalkeeper who joined Wivenhoe in July 1979 having played for Bury Town, Coggeshall Town and Brightlingsea United. Made his debut on 20/8/79 and gained Representative Honours for Essex during his time at Broad Lane but unfortunately his appearances became more and more limited through injury and his last outing for the First Team came on 7/5/84. Ended his Dragons career playing for the Reserves during the 1985/86 campaign.

Midfielder who made an immediate impact by scoring on his First Team debut on 14/11/83 against Braintree Town in a Floodlight Cup competition tie. Failed to hold down a regular place in the Senior side and left Broad Lane after playing his last game on 11/2/84.

Able to operate in the midfield or back four “Brighty” joined Wivenhoe from Chelmsford City and became Club Captain for the best part of three seasons. Formerly with Colchester United (where he made 25 Football League appearances between 1975 and 1977), he made his Dragons debut on 14/3/81 before leaving Broad Lane in January 1985. Returned to us from local football midway through the 1986/87 campaign and made his last Senior appearance on 17/3/87, although he remained as a Reserve team player until leaving in May 1987. Was in the building trade until his untimely death. 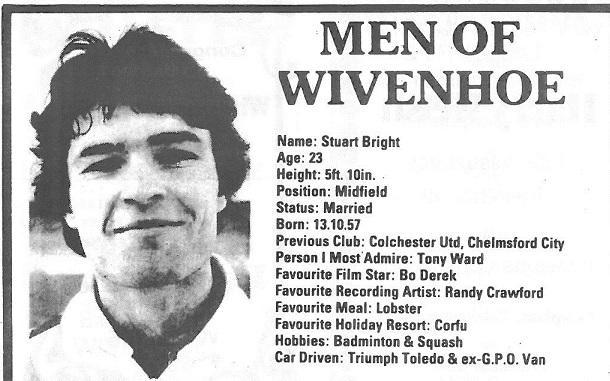 Shane never really had many chances to stake a First Team claim having joined from local football in 1983. Made his Senior debut on 8/10/83 and last appeared in the Dragons line-up on 12/11/83 before departing Broad Lane to play for Halstead Town and Sudbury Town.

Posted by DragonJon on November 4, 2014
Posted in: Do You Remember. Leave a comment

Ian Kershaw (yellow/blue left) shares the distinction along with Paul Harrison as being the only Wivenhoe Town players to have scored a hat trick after coming on as a substitute since the Club gained senior status back in 1979.  Kersh made 77 first team appearances for the Dragons and scored four goals.

Phil Otum (right) was the Reserves leading goal scorer during their Essex & Suffolk Border League Division 2 title triumph with 20 goals in 21 appearances.  Phil went on to score three times in 21 first team games.  See ” A Season in Time” for a more detailed look at the 2000/01 campaign.