Do You Remember ……. Gary Higgleton

Posted by DragonJon on January 17, 2015
Posted in: Do You Remember. Leave a comment

Having previously played for Severalls, Gary joined the Dragons in 1981 from West Bergholt. After impressing in our Reserves he made his First Team debut on Saturday 21st August 1982 in a 2-0 Essex Senior League victory at Ford United and went on to play in a variety of positions during his 40 appearances that season in a side that reached the last 16 of the F.A.Vase. Although mostly remembered as a defender-cum- occasional midfielder, “Higgy” is one of only a handful of players during the club’s entire history who has turned out in EVERY position for Wivenhoe’s First Team including goalkeeper. His one full appearance between the posts came on Monday 5th May 1986 as the Dragons took on Witham Town in the Final of the Harry Fisher Memorial Trophy. With all the club’s keepers unavailable for the tie “Higgy” gave an excellent performance which included a brilliant point blank range save in the dying seconds to ensure that Wivenhoe took the Cup by virtue of a 2-1 victory. 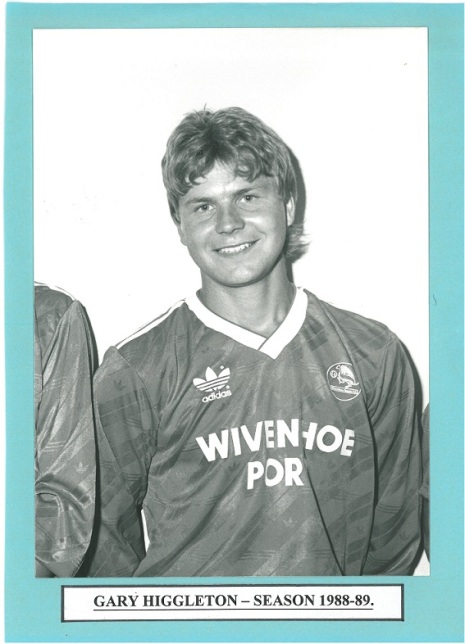 A true clubman during his time with the Dragons, Gary ranks as the 5th highest “Senior” appearance maker for Wivenhoe Town having turned out on 248 occasions for the First Team during his eight seasons at Broad Lane. With seven goals to his credit “Higgy” made his last First Team appearance on 20th December 1988 in a Knight Floodlight League fixture at Clacton Town. Gary’s Dragons career ended as it began as a regular and consistent performer in our Reserves during the 1988/89 campaign, helping our Second string to finish 3rd in the Essex & Herts Border Combination with his last appearance in a Dragons shirt coming on Saturday 29th April 1989 in a 4-0 victory over Billericay Town Reserves. Departing Broad Lane in the summer of 1989 “Higgy” enjoyed two very successful years with Brightlingsea United before going on to play for Gas Recreation and Stanway Rovers.