Posted by DragonJon on July 3, 2015
Posted in: Do You Remember. Leave a comment 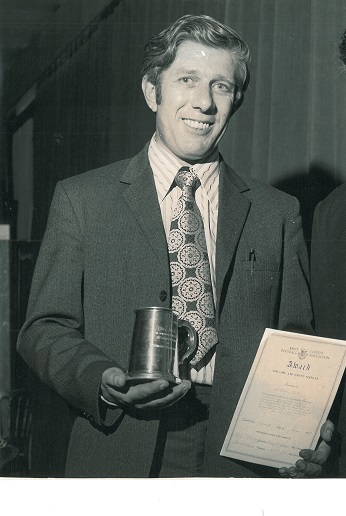 Over it’s history there are a number of people whose name is associated with this club, Bill Hill being one such person. Also known as “Jock” having been Glasgow born, he first came to this club as a teenager in 1946 when it was known as Wivenhoe Rangers and was competing in the Brightlingsea & District League. He played for the club at both First and Reserve team level for over twenty six years before finally hanging up his boots in the summer of 1972. It is a shame we can not trace his number of appearances as I am sure that he would probably be the all time record holder.

Off the field his enthusiasm and commitment to Wivenhoe saw him immediately become a member of the club’s committee serving from 1946 to 1955. He then became Treasurer and Hon. Assistant Secretary from the summer of 1955 to 1957 before eventually being elevated to the position of Hon. Secretary, a post he held for 23 years until stepping down in 1980. His services were honoured by the Essex County Football Association on a number of occasions and he remained a member of the club’s  Committee for a further thirteen years. For several seasons he was a familiar face that every regular Dragons supporter knew as he operated the turnstile at home matches.

Bill saw all manner of highs and lows during his days with Wivenhoe and I know he was proud to be associated with the football club. At the end of the 1995/96 campaign at the club’s Awards Night Bill was presented with a plaque to commemorate the achievement of 50 years unbroken service to the Dragons which he accepted in his usual modest way. Sadly this was to be his last time at Broad Lane as he passed away on 16th July 1996. These days it is rare for someone to remain loyal to a club through thick and thin for such a length of time and it is doubtful that anyone will ever match his 50 year association in the future. Whether you knew him as Bill or Jock, he was certainly “Mister Wivenhoe”.