During early July 2019 the local football scene lost one of it’s great characters when Ken Ballard passed away.  Although he had involvement with other clubs around the area all long standing dragons supporters will always associate him with Wivenhoe Town as he gave so much to this club in various capacities during his spells with us.

As a youngster Ken was on Tottenham Hotspurs books (the club he supported) but unfortunately he suffered a bad ankle injury bringing an end to his time with them.  He joined the army where he spent nine years during which he played for his battalion side in such exotic places as Malaya and Borneo (while in complete contrast, his last game came at the not so exotic Tilbury for our reserves).  After leaving the forces he continued his playing career in the Essex and Suffolk Border League with the likes of East Ward and West End as well as Layer United and Layer Fox in the Colchester and District Sunday League.  Ken’s first move into management came in the latter competition with Riverside Wanderers before taking up coaching and management in youth football with Brookland Boys.  After two years he took charge of Stanway Villa under 12’s and progressed them through to Under 16 level.  By now, a qualified match official, he took the entire squad over to Brantham Athletic to enable the lads to progress up into Westside Eastern Junior Alliance Football.  It was from there that Ken joined the Dragons under 18’s management and enjoyed much success before taking over as reserve manager when we rejoined the Essex and Suffolk Border League.

Ken’s first spell with Wivenhoe ended when he joined Eastern Counties league Hadleigh United, where he assisted Louis Newman prior to taking over the management reigns at Brightlingsea United, replacing another ex dragon in Steve Wright.  It was from North Road that he returned to assist Frank Thompson with the first team during a difficult rebuilding process that had seen every player, except Alan Day leave the Club.  After this second spell came to an end, Ken continued involvement on the local scene and also fought a brave battle against cancer.  As Wivenhoe Town hit an all time low (another one), with the threat of closure, it was no surprise to see Ken offer his services to the club once again and he embarked on a mission to both bring the pitch up to a decent standard and improve the facilities (the WTFC tiling in the clubhouse was all his work).  Affectionately known by the fans as “Uncle Ken”, his enthusiasm for the game was aptly demonstrated by the many roles he filled here at Broad Lane over the years, including Reserve Manager, Under 18’s Manager, Assistant First Team Manager, Physio for all three sides, Groundsman, Maintenance Man, Referee, Linesman, as an emergency player for the Reserves (“I tried to hide out on the wing but the silly bastards kept giving me the ball!”), play for the supporters 5-a-sdie team, served on the Clubs committee, played a massive part in re-establishing and revamping the bar during his final spell, worked in the burger bar ……….. and was also Father Christmas!

Ken had a “Del Boy” like quality to wheel and deal and get things done to improve the facilities with little or no cost to the club itself although, just like Del Boy, it didn’t always go according to plan.  I recall one job lot of free paint being mixed together to make it go further and producing an horrific dull orange coloured home dressing room, which had to be finished off with a wall paper border as the paint ran out anyway, resulting in an exasperated first team manager Julian Hazel to compare it to (and I quote) “a f#ck#ng granny annex!  I remember an affronted Ken asking what the problem was, before eventually admitting this wasn’t one of his finest hours, along with breaking his back axle while trying to pull down the club shop!! 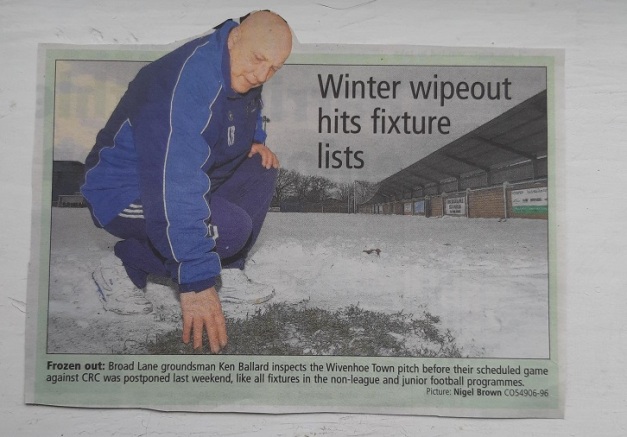 I’m sure we all have our fond memories and stories of Ken and having known him for some 30 years or so, I was privileged to have been mates with him knowing that if I had a problem, he was always the first to help out.  Despite the desperately disappointing circumstances that resulted in him leaving Wivenhoe Town for the last time (after which he linked up with Stanway Rovers as Groundsman and Gas Recreation) I know that if the club had ever needed his help, he would have returned in an instant as he was always a Dragon at heart.  Sadly that call can now never be made.

Thanks for everything Uncle Ken, and not just from those of us at the Hoe’, but from everyone on the local football scene over the many years. 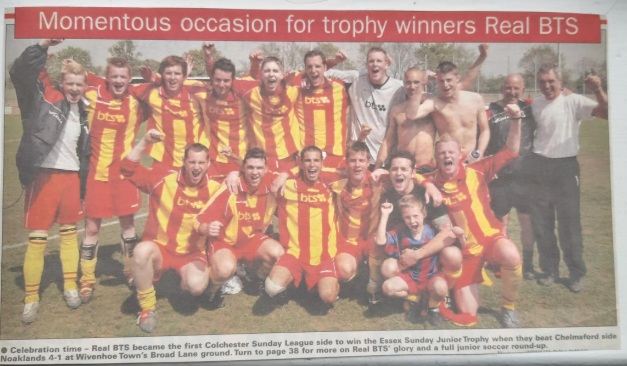